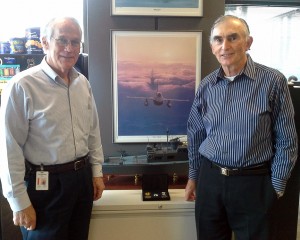 Vice Admiral Amerault embarked on his naval career on 29 June 1965.   After having his commissioning as an Ensign at the United States Naval Academy, he served at sea as Gunnery Officer and First Lieutenant on board USS Massey DD 778. He then served as Officer-in-Charge, Patrol Craft Fast 52 (Swift Boat), he conducted more than 90 combat patrols in hostile waters off the coast of Vietnam.   One example of his valor and heroism is quoted from Commander Coastal Division Fourteen on 21 December 1967, “On the night of 4 August 1967 the patrol craft in the area adjacent to the one you were patrolling came under enemy fire.   Disregarding your own safety, you directed your patrol craft to within 300 yards of the beach and bombarded the enemy position with intense .50 caliber and 81mm mortar fire.   During this exchange your patrol craft was narrowly missed by a barrage of recoilless rifle fire.”   He was awarded a Bronze Star Medal with Combat V and the Combat Action Ribbon for his service.

A model of the Patrol Craft Fast 52 in on display in the Geer Services office in the EverBank Center in Downtown Jacksonville.  Admiral Amerault donated the model to the Adams Class Museum for a silent auction item for the Adams 2012 Gala held on October 13, 2012.  Pat Geer bid on the model and won the auction.  Joe Snowberger of the Jacksonville Historic Naval Ship Museum Association (JHNSA) alerted Admiral Amerault that his ship was on display downtown and the Admiral made a special trip downtown to see his model and visit with the Geer Services staff.  The Admiral shared his experiences starting with graduation from the Naval Academy, his tour on the Swift Boat 52 and continuing throughout the remainder of his distinguished career.   Admiral Amerault is an exceptional American and it was an honor for Richard and Pat Geer to spend time with a Navy Flag officer with such a distinguished career.  Thank you Admiral Amerault for your time on Friday and your service to America.

Appreciate our military, they make our country free, and don’t forget to thank them for their service anytime you have the opportunity.