Pat and Richard Geer are excited to be featured in this month’s Liberty Life Magazine in Jacksonville, Florida. The article does an outstanding job detailing the origins of our business and the military backgrounds of the owners. Enjoy: 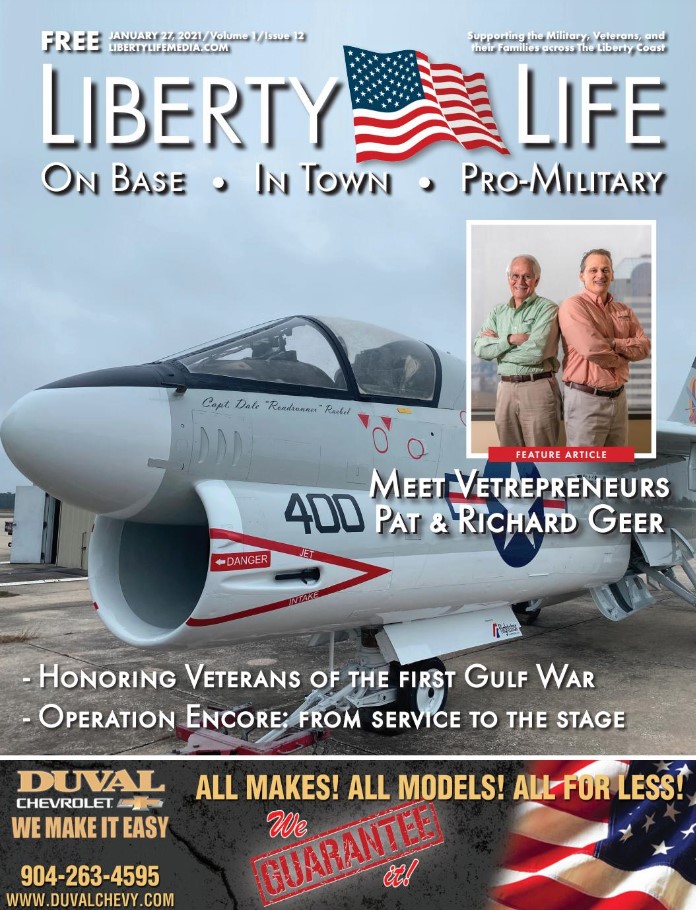 You’ve seen their work for the National POW/MIA Memorial and Museum, Wreaths Across America at the Jacksonville National Cemetery, and the Navy Wives Clubs of America, among other prominent organizations. They’re a silent force on The Liberty Coast, helping local businesses remain relevant, connecting Veterans with essential resources, and consistently showing up for their community. 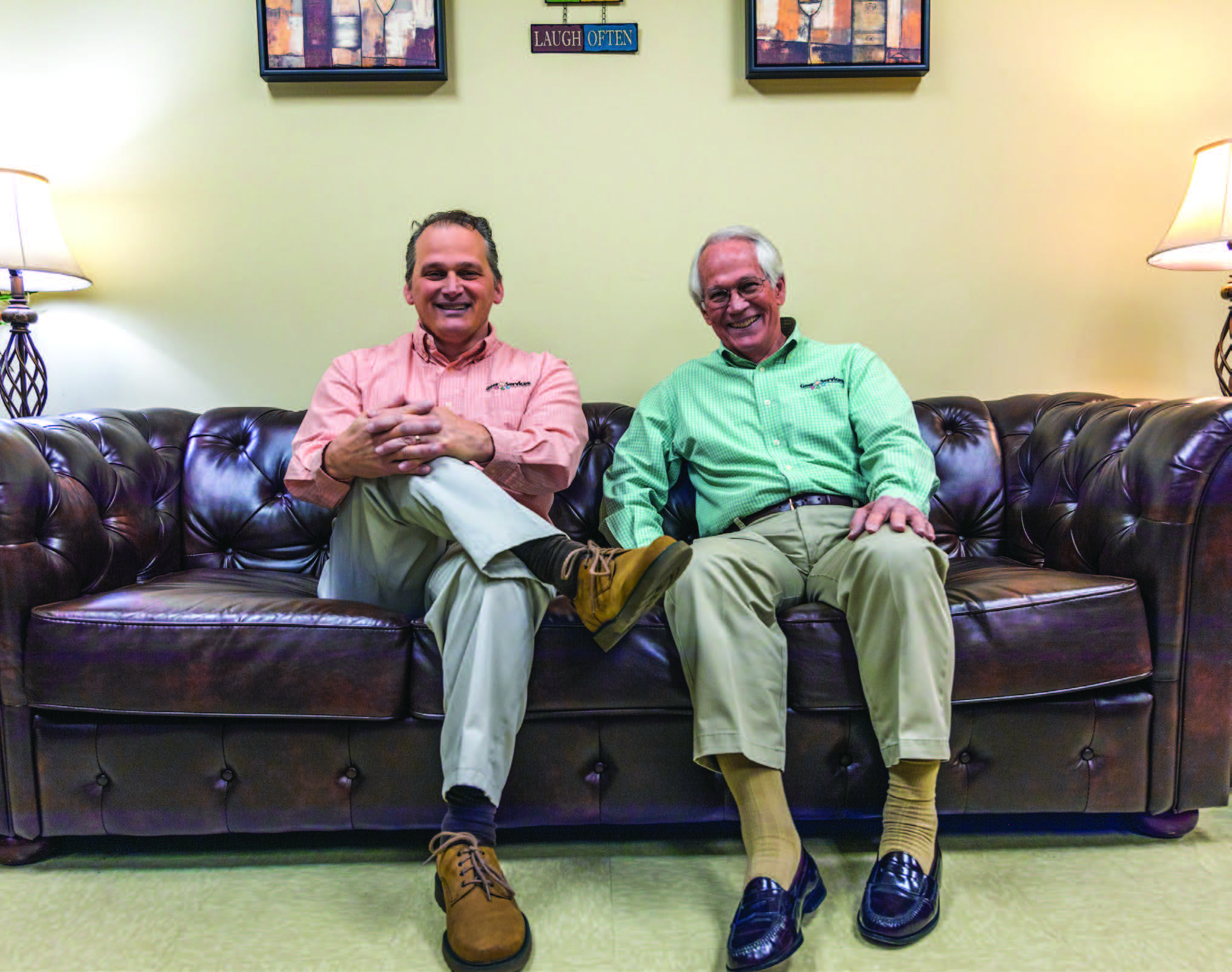 Father-son team William “Pat” and Richard Geer started Geer Services Inc. somewhat fortuitously in the early 2000s, when Richard was still in the Air National Guard. But their story begins decades prior, when Pat’s father moved their family from Corpus Christi, Texas, to Jacksonville, Florida, where he was stationed at Naval Air Station Jacksonville.

“[My father] was a SeaBee, so he had to go back and rebuild after the Pearl Harbor attack, my brother served in the Army, and my mother’s brother served in the Army Air Corps back in the day,” Pat said. After graduating from Robert E. Lee High School in Riverside, Pat joined his father at NAS Jacksonville as an apprentice hydraulic mechanic. Pat went on to train at Keesler Air Force Base in Biloxi, Mississippi, before returning to Jacksonville to work on the Navy’s aircraft electronics equipment. He enlisted in the Florida Air National Guard in November 1967. 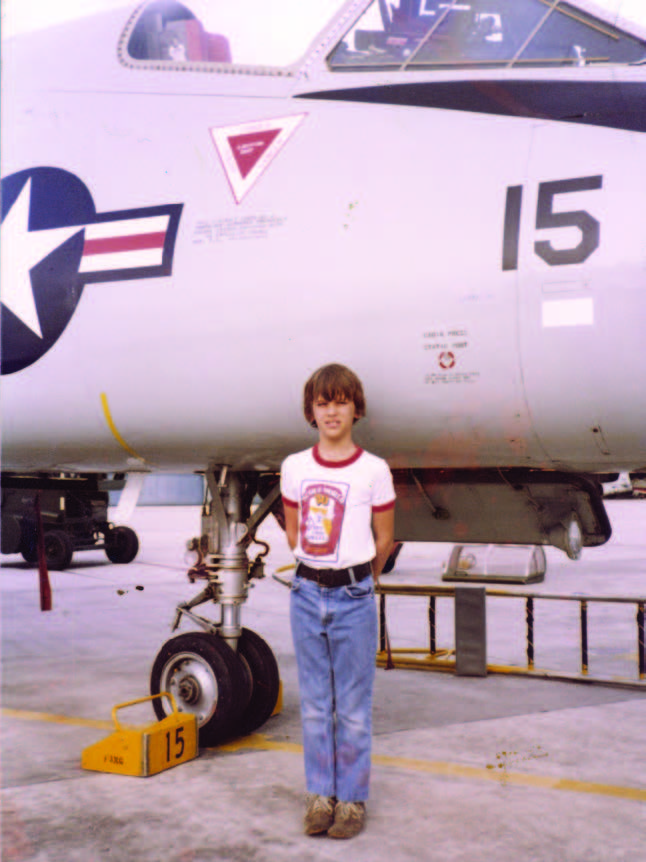 “Back in the day, there were times that the kids could come out, and [Richard] would go out with me during annual training, and he was around the aircraft and just enjoyed it, and I think that got him interested in joining,” Pat said.

If you noticed the year Pat enlisted, you’ll recall that the United States was in the middle of the Vietnam War. It also happened to be the same year of the USS Forrestal fire in the Gulf of Tonkin. So when Pat returned home from training, he was working on equipment filled with bullet holes from Vietnam. And the aircraft that didn’t sink during the USS Forrestal fire? They were also transported back to the U.S. for repairs.

During the ‘70s, when Richard was still a kid and the Cold War continued to consume the daily lives of Americans and Russians, Pat was activated for the Middle East conflict.

“I didn’t know if I could go home or not. It ended up that it stopped pretty fast, so we didn’t have to go anywhere,” Pat said. “But the whole Cold War, you know, Russian bombers were flying off the coast, and our planes would go up and chase them down and track them ‘til they left our air space, so those were the types of things we were involved in as a unit during the Cold War. But we didn’t have to go anywhere, so that was fortunate.” 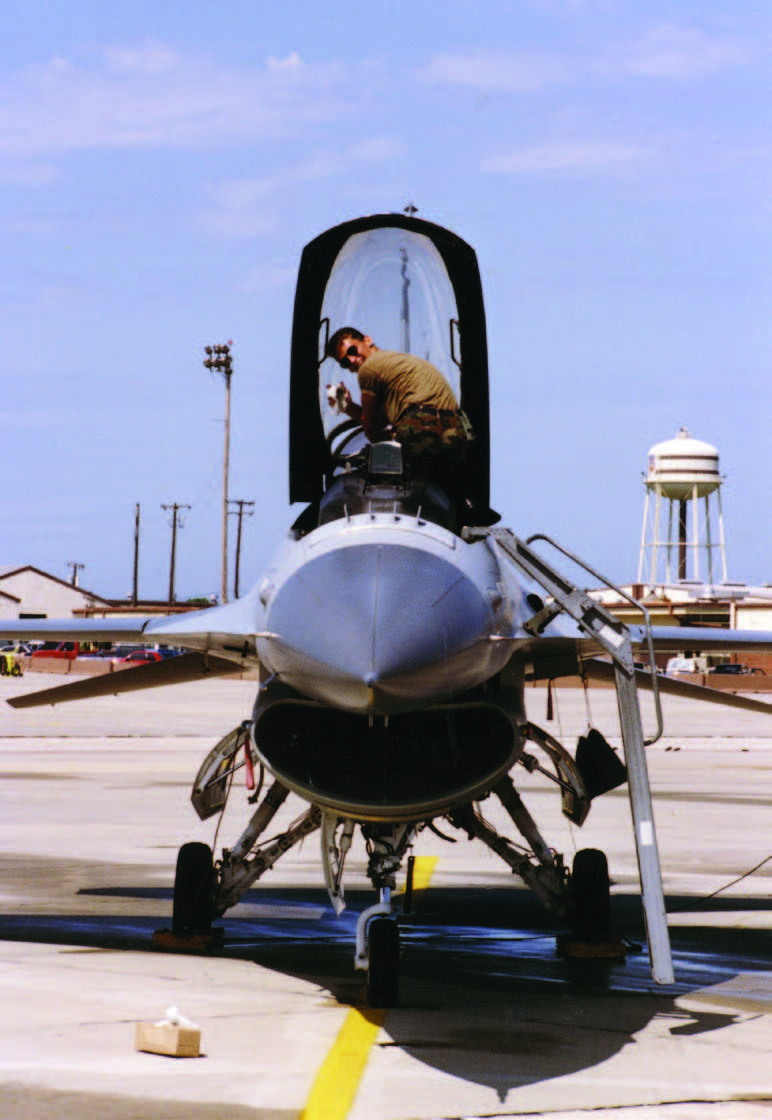 Richard would later join his father in enlisting in the Air National Guard, where he served as a tactical aircraft maintenance specialist for his first 10 years before moving to the photography and graphic design side for another 10 years. During 12 of the 20 years that Richard was serving part-time for the Air Force’s reserve component, he served on active-duty for counterdrug missions and intelligence support.

Before Pat retired in 1999, they got to work together. Pat recalls times when they would both be on a flight line, Richard as a crew chief and Pat working on aircraft.

Although Pat and Richard both served in the Air National Guard, they ultimately retired from the Air Force. Toward the end of Richard’s service, when he was involved in the counterdrug missions, he started getting requests to work on websites. “At night, [Richard] and I would work on different customers, and then I was getting close to where I could be eligible to retire [from Bellsouth],” Pat said. “So we did that for a few years just part-time, and then I decided that I either have to continue working at Bellsouth or retire, so I retired.”

Pat and Richard moved their operations into the TIAA Bank Center in Downtown Jacksonville in 2005 and started growing their business as Richard neared retirement from the Air Force. Early contracts with notable companies in the region pushed Geer Services Inc. to grow its team and further establish what they offer.

“We started working almost full-time for CSX, so the programmer who worked for me at Bellsouth left Bellsouth and came to work for us, and he worked full-time as a consultant to CSX from our company,” Pat said. “And then Richard ended up doing the graphic design part of a lot of the online systems that CSX built over the years, so that was sort of the linchpin to say, ‘Hey, let’s go do this.’”

Although the two served together while in the Air National Guard, nothing could prepare them for growing and running a successful small business together, especially as it relates to working with family. When they were in the military, Pat and Richard were usually assigned to different shops. Now, they see each other on a daily basis.

“Well the father-son thing is an issue, ‘cause see, he can read me like a book, and other people might not have an idea of what my temperament is at the time,” Pat said. Richard added, “I’d be in meetings where we’d have the guys, and I could sense dad coming to a statement or something, and I can just kind of feel—yeah, it’s a little different being personal with your family, because you can just feel the, ‘Oh no, here it comes.’”

Another lesson Pat has learned through this journey is that corporate experiences can’t always be applied to small-businesses. “When we set up bookkeeping, I made it way too complicated. Because there was something called accounts and areas at Bellsouth, and I just thought, ‘Well, I’ll follow that method and that will be good. Not so much,’” Pat said. “It was a mistake trying to think a small business operates the same as a corporation. It doesn’t. So that was a problem that I kind of caused when we started this.”

But there were also benefits to Pat’s corporate experience. For one, they trademarked key things, such as their logo and an expression that’s been in the family for generations: Geer built. And they had friends and family members who have supported and guided them along the way.

One concern that might come to mind for transitioning Servicemembers who are considering entrepreneurship is resources. Pat and Richard Geer recommend starting a business while maintaining a steady job to ensure you don’t run out of capital.

For the thousands of questions concerning where to begin or how to get support in areas you’re less knowledgeable about, they suggest connecting with business networks, such as your local chamber of commerce, Beaver Street Enterprise Center, the University of North Florida, and even other small businesses.

“If you don’t know anything, you’re going to get in a bunch of traps without some guidance, and those are good groups. Companies like ours always try to help Veterans get started, if they just need a little coaching,” Pat said. “So there’s a whole network of Veteran-owned businesses that have gone through different ways of getting to where they are, and having that resource of so many companies would be useful.

Another thing to consider is asking yourself, “Should something that happened during the military be connected to how I register my business?” When Pat and Richard Geer retired from the military, they couldn’t answer that question easily. But after researching resources with the City of Jacksonville, they found a group that could help. Because of that guidance,
they were able to register Geer Services Inc. as a service-disabled Veteran owned small business, and now they’re passing that knowledge along to the public in the form of a Veteran resource web page.

“We’ve listed things we’ve learned at the top from the Veterans support and there’s a lot of business tools. Big thing too is just don’t be afraid,” Richard said. “A very small percentage of everybody in the military that retires uses the VA. And I think maybe even knowing that, trying to get with them and get assistance can always help. You’d be surprised what kind of benefits you might be getting and other aspects of business help.”

At the beginning of this article, you were told that the Geers care about their community. But what exactly does that mean? 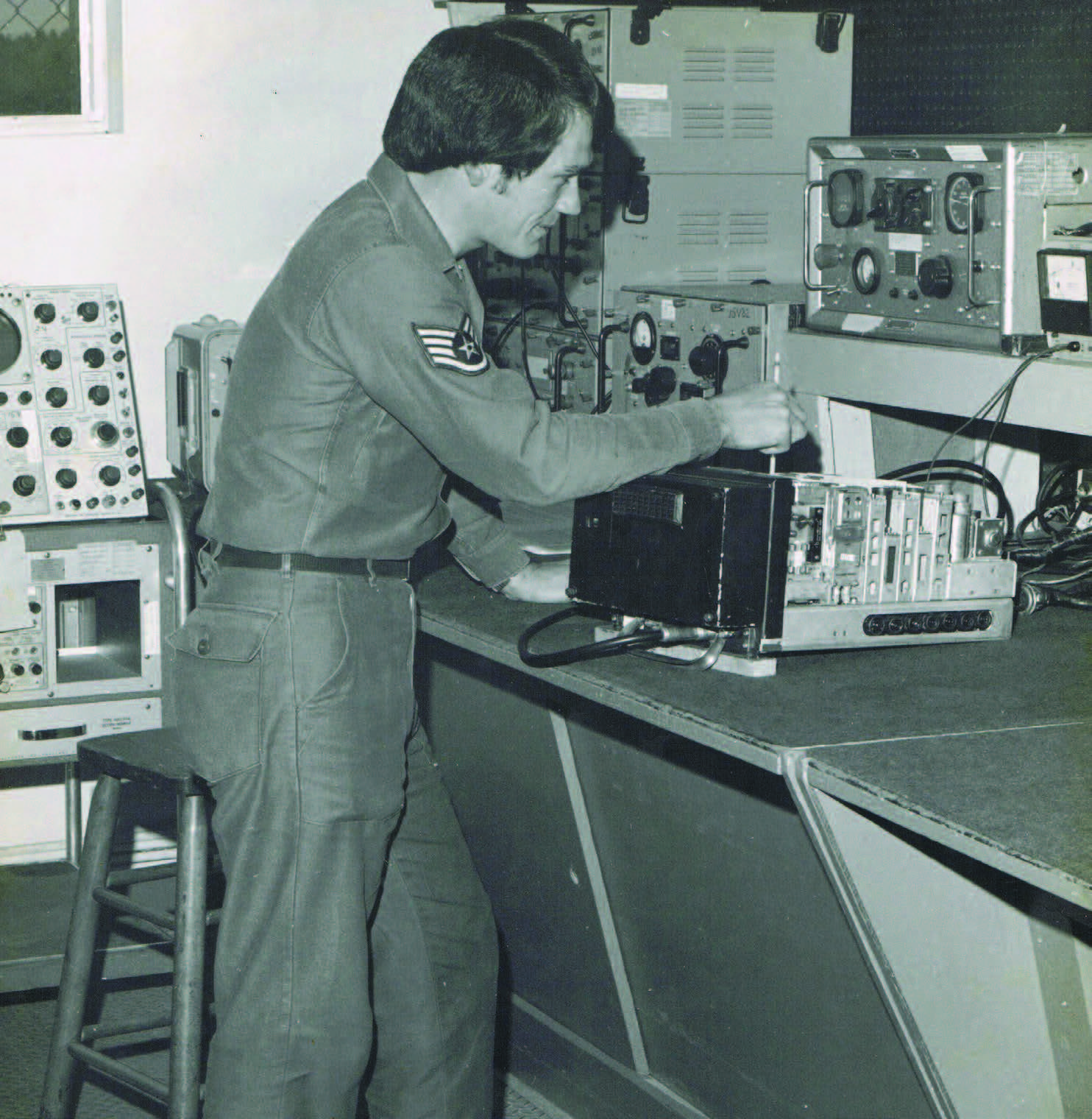 “There’s a friend of ours, he’s a retired three-star admiral, and we met him because there was a gala, and they had a silent auction, and I put a bid on his swift boat. So he was in Vietnam driving a swift boat down the rivers getting shot at as a lieutenant in the Navy,” Pat said. “He comes to visit us regularly, and we actually got him on the board of the POW/MIA Memorial, but he asked us a question one day. He said, ‘Why do you do this?’”

Richard compares his reason to the movie Taking Chance. A true story, the movie follows Lt. Colonel Michael Strobl, a Marine who was assigned a desk job at Marine Corps Base Quantico while the Marines he served with during the Gulf War were deployed to Iraq during Operation Iraqi Freedom.

“I had friends in the Army who went to Grenada and the combat missions since then. I really never deployed, and in learning about the people who got injured or were missing or were killed in action, it feels like I didn’t do enough in the military,” Richard said. “Even though I wasn’t actually in the trenches with these guys, and they go through a lot, it feels good to kind of almost be the visual face of helping them with their brand and then hopefully they’ll bring a lot more awareness to the MIAs and POWs with this huge monument.”

For more information on Geer Services Inc., to add to the Veteran resource page, or to connect with Pat or Richard, visit GeerServices.com. 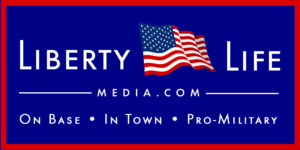